We have developed a case study of a Hybrid Braking System (HBS) to illustrate some of the features of the HiP-HOPS technique.

The HBS is meant for electrical vehicle integration, specifically for architectures that consider one electrical motor per wheel. It is a brake-by-wire system as it does not contain a hydraulic link between the brake pedal and individual wheel-braking actuators; instead it includes an electronic redundant bus system that allows for central and local-wheel control units to communicate. 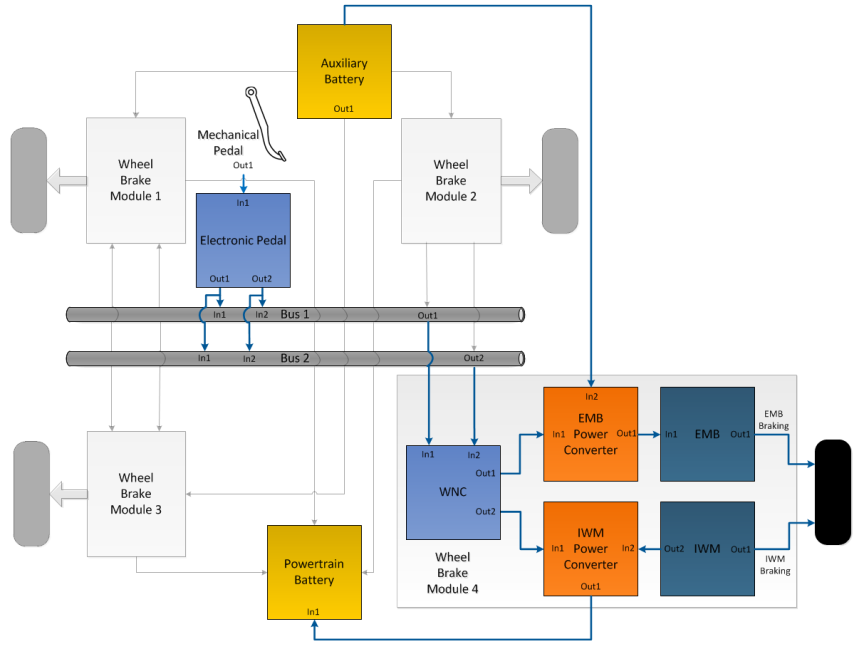 The system is termed “hybrid” as braking is assured by the cooperative effort of frictional Electromechanical Brakes (EMBs) and the In-Wheel Motors (IWMs) from the propulsion architecture. The use of the IWMs to brake gives one of the most interesting features of the HBS: while braking these electrical machines work as generators, transforming the kinetic energy from the wheels into electrical power that is fed to the vehicle’s powertrain battery; the result is in an increase of the vehicle’s range.

Understanding the communication and control architectures is crucial to be able to acknowledge the HBS failure behaviour. The first thing to note is that communications are mounted on top of the Time-Triggered Protocol for safety-critical distributed real-time control systems (TTP/C). In TTP/C every element that uses the communication system is allocated with a pre-defined slot of time to transmit. 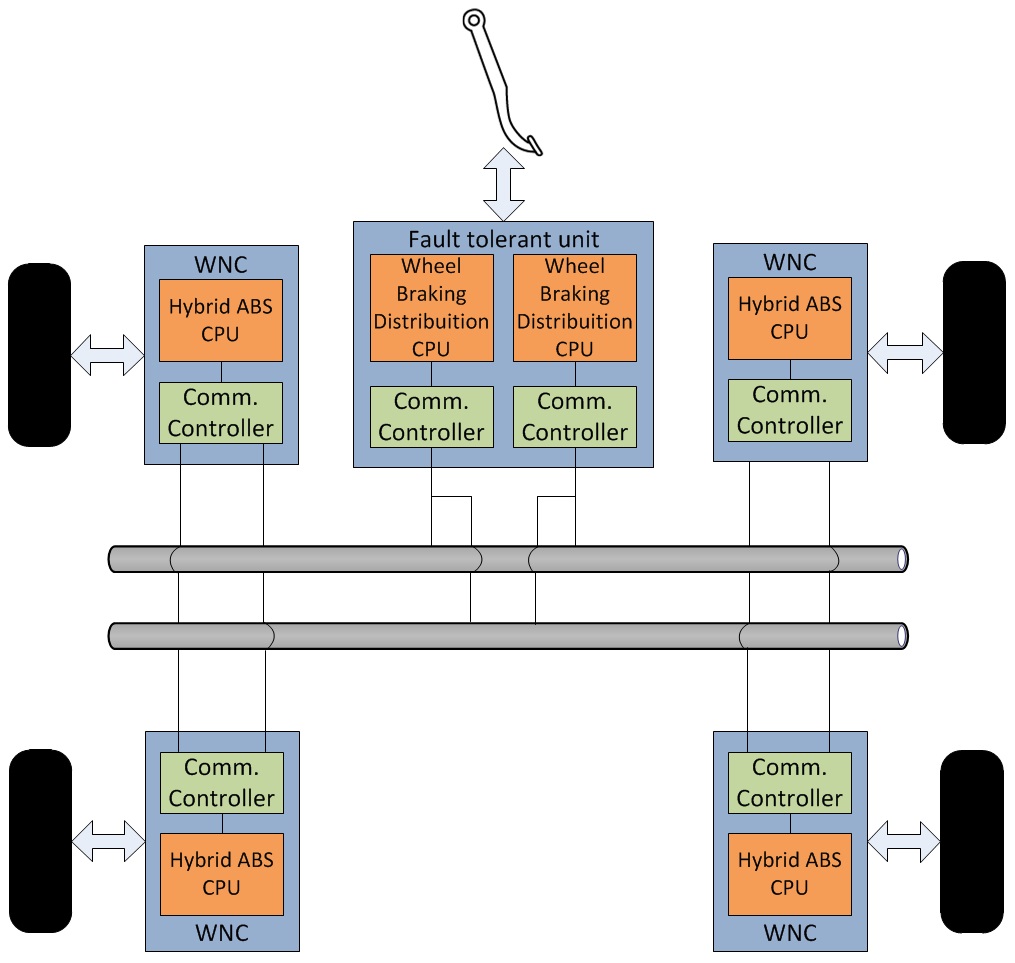 HiP-HOPS is a flexible tool and it is capable of analysing models developed with Matlab Simulink or ITI Simulation X, for example. A top level HBS model, relating to the early stages of system design, was built using Simulink. For better illustration, the architecture is simplified and only the braking of one wheel is considered in the model presented here.

The system behaviour considered in this model is as follows:

The driver’s action on the mechanical pedal is sensed and processed at the electronic pedal. The latter acts as a central control unit that coordinates 4 local wheel controllers according to the pilot’s braking intentions. All the referred units are interconnected through a digital communication network. After receiving the braking force demand for the wheel it is responsible for, every local unit calculates the amount of torque to be developed by each actuator and then controls them accordingly through power electronics. When braking is taking place, power flows from the low voltage battery (auxiliary battery) to the EMB and from the IWM to the high voltage battery (powertrain battery). The haptic feedback that should be provided to the driver according the braking action is neglected in this model.

The next step is to capture in HiP-HOPS the failure behaviour of the HBS architecture, describing how each of its components can fail and also how system hazards are caused by component output deviations; this is done through the use of logical failure annotations .

To better demonstrate how this process should be conducted by the safety engineer, some of the annotations derived for the HBS are introduced in the next sections, starting by the hazards formulations.

For this simplified case-study, only two hazards were considered:

For the electronic pedal, it is considered that its two outputs can be value and omission deviated.

Independent internal failures were considered as causes of the deviations of each output of the electronic pedal because the adoption of a redundant structure was expected for this subsystem (see HBS Communications and Control above).

The table below illustrates the fault annotations for the electronic pedal unit.

The communication buses are considered to only have internal failures of the omission type due to the TTP/C proprieties: in the presence of other types of faults, such as a value failure caused by EMI interference, a Cyclic Redundancy Check (CRC) mechanism is responsible for discarding the message at the receiving unit, assuring fail-silent behavior. In this way the failure can be classified as of the omission type. Omission of the output of each bus can also be caused by the omission of its two inputs.

Considering the scenario where the electronic pedal produces value deviated outputs, again the behavior of components within TTP/C architectures must be kept in mind: components are expected to deliver correct information or no information at all. Therefore, if a value failure signal is inputted to the bus, the deviation will be propagated. However, as the pedal unit includes two communications controllers, it can be considered that the buses’ outputs will only have a value deviation if:

Both omission and value deviations are admitted for the outputs of the wheel node controller.

Like with the pedal unit, independent internal failures were considered for the causes of the deviations of each output. Each power converter reference may be calculated independently to avoid simultaneous failure of both braking devices, for example.

One of the features that will be demonstrated in this case study is automatic ASIL allocation and decomposition. It is then necessary to assign each hazard with an ASIL. H1, loss of braking, is assigned ASIL D and H2, wrong value braking, is assigned ASIL A. This was done solely on the basis of the severity of each hazard, as this is an illustrative example. For a ‘real situation’ ISO 26262 risk assessment procedure would be undertaken.

For cost optimisation during ASIL assignement, the user is allowed to define an heuristic that expresses the cost of a component in function of its ASIL implementation. For this case study it was used that agrees with what seems the industry perspective, and that expresses that the highest cost jump is between ASIL B and ASIL C. 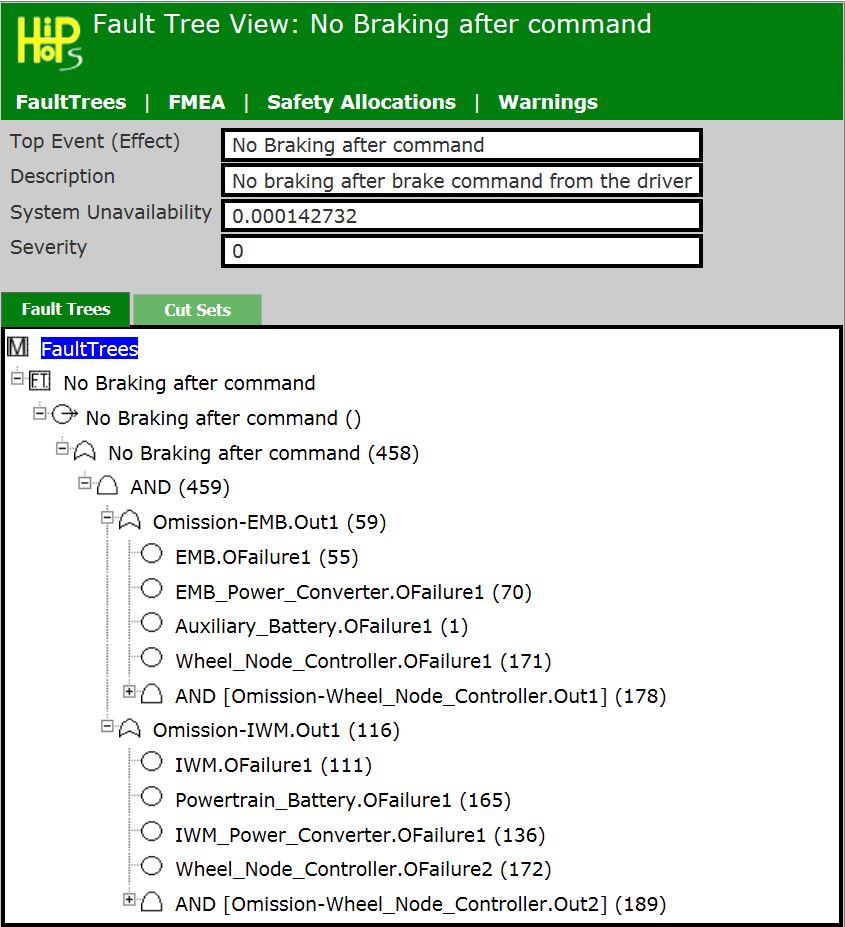 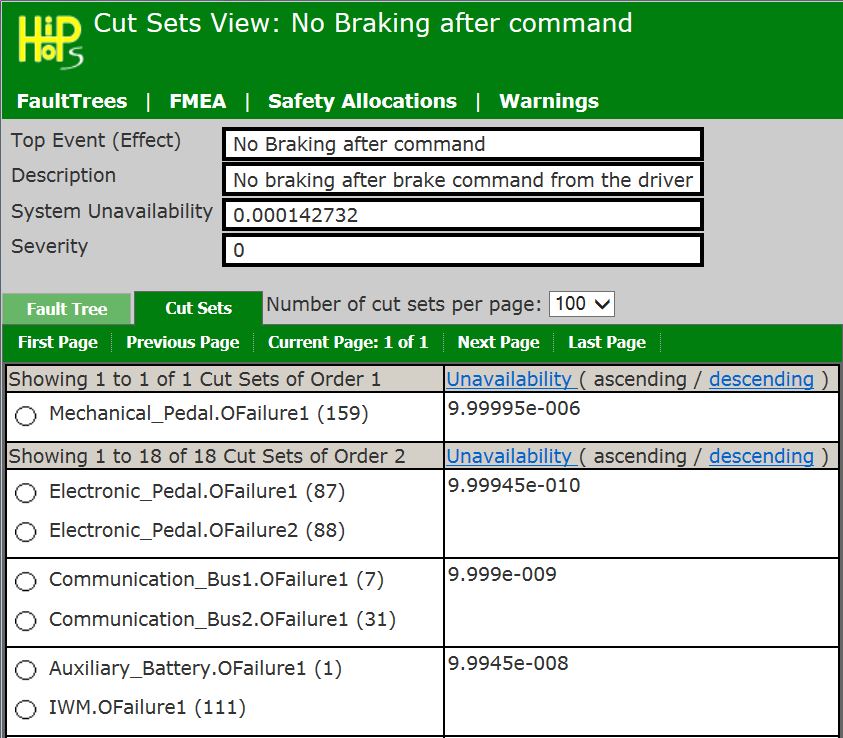 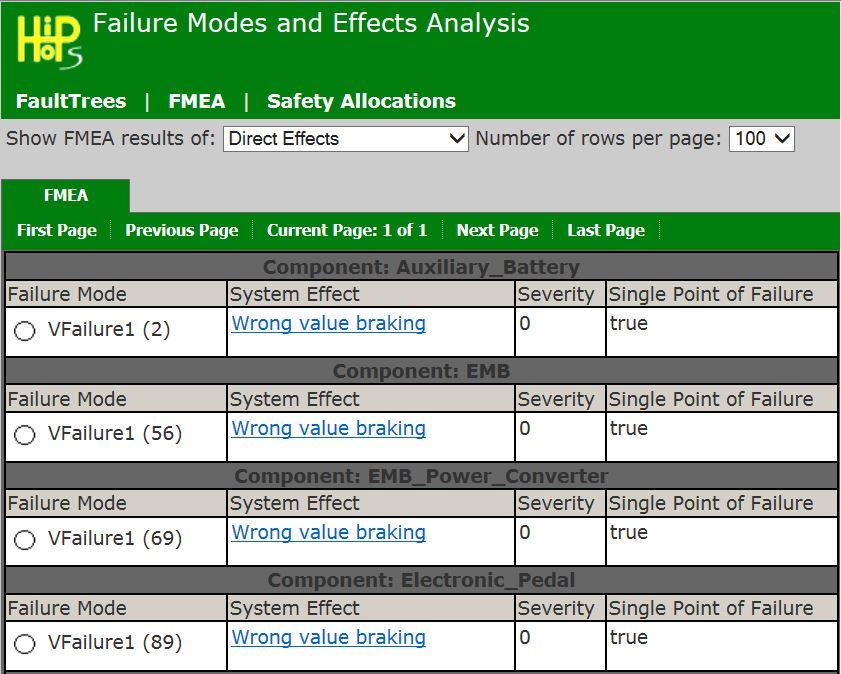 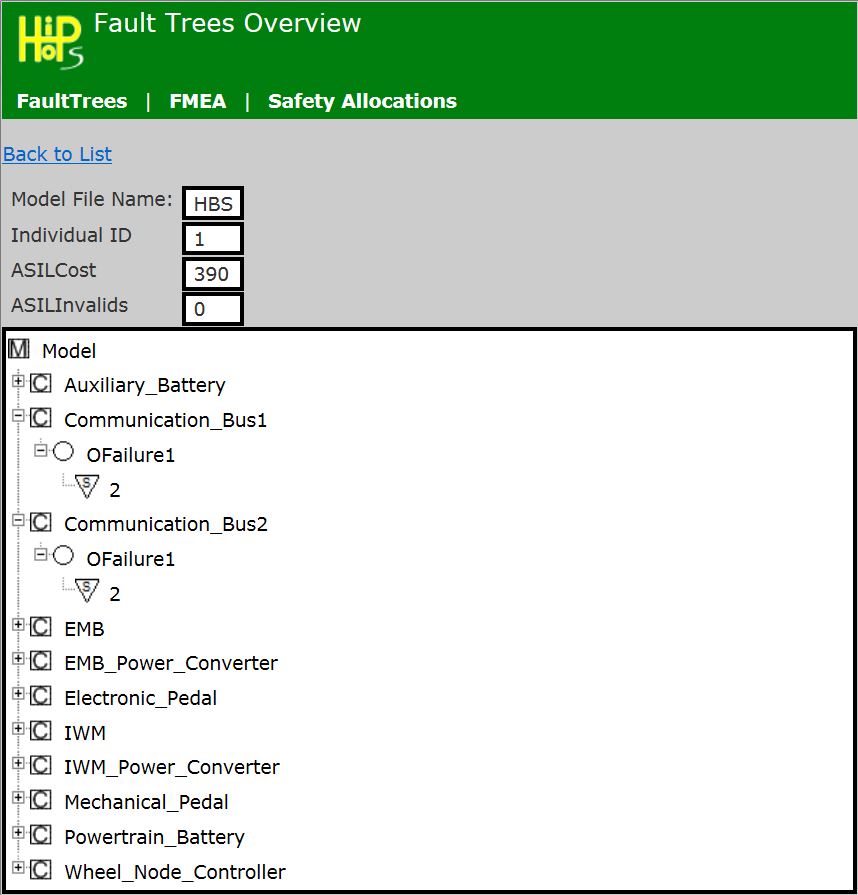